Hello guys! I thought this would be a fun, short post about my Ilvermorny sorting. If you guys didn’t know, JKR released some new information on the Ilvermorny School of Witchcraft and Wizardry which is a wizarding school based in America. The information was so interesting and it left me wanting another couple of books just for Ilvermorny (that’s the power of JKR!). I guess I will just have to be content with the extra tidbits we are getting at the moment!

Anyway as I said, this post is going to be my sorting in Ilvermorny. I’ll split it up into two parts pre-Sorting and post-Sorting. Let’s get right to this!

I am very nervous, but excited at the same time. Here is a snippet of the information that we got from Queen Rowling just so you know the decision I’m facing.

It is sometimes said of the Ilvermorny houses that they represent the whole witch or wizard: the mind is represented by Horned Serpent; the body, Wampus; the heart, Pukwudgie and the soul, Thunderbird. Others say that Horned Serpent favours scholars, Wampus, warriors, Pukwudgie, healers and Thunderbird, adventurers.

Somehow I feel like I fit everyone of those houses (except for the Wampus actually!). In my head and heart, I’m leading towards The Horned Serpent but I might just land in Pukwudgie. Anyway enough fretting lets just get into this sorting!

The Ilveroney house I got sorted into is…

So…yeah. This is hilarious! Out of all of the houses I get Wampus, the house I was not expecting at all! So I am actually writing this ten minutes after I actually did the sorting because I was SERIOUSLY contemplating doing the unforgivable thing and doing the sorting again. Nothing against anyone who is a Wampus but just the name put me a little off and by the fact it is the house that favours warriors. And if you had read the whole piece on Ilvermorny piece you would know that this isn’t something like the sorting hat; you don’t pick were you want to go.

So I was pretty hacked off and decided to do some digging and what I came out with actually made me change my opinion on me becoming a Wampus. Firstly I dug out this from geeksandsundry.com:

The Wampus Cat is a fearsome cougar in Native American myths. In Cherokee legend, she is a woman who disguises herself as a cougar in order to spy on the men of the tribe, which sounds a lot like an animagus. In East Tennessee, the Wampus Cat is considered a spirit of death and the earth, continuing the trend of creatures associated with the earth, air, fire, and water. Importantly, the Pottermore section on the History of Magic in North America lists Wampus Cat as a source of hair for magic wands, saying of the wandmaker Johannes Janker:

“His wands were highly sought after and instantly recognisable, as they were usually inlaid with mother-of-pearl. After experimenting with many cores, Jonker’s preferred magical material was hair of the Wampus cat.”

‘considered a spirit of death and earth’– if that doesn’t sound awesome, I don’t know what does. The fact that the hair of a Wampus is used for wands is pretty cool too!

But the part that was still throwing me was the ‘warrior’ part and that when I found a comment on the internet (reliable, I know) saying how ‘being a warrior is different in the wizarding world compared to the Muggle world’ and that is so correct! I think the moral of this little lesson that I have experienced is that you can always find the good in something, even if at first you can’t.

I am a Wampus and proud and Ravenclaw and proud! Interesting combination but I might start getting used to being called a Wampclaw. 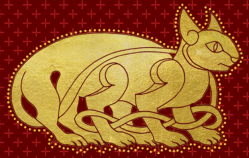 28 thoughts on “My Ilvermorny School of Witchcraft and Wizardry Sorting!”