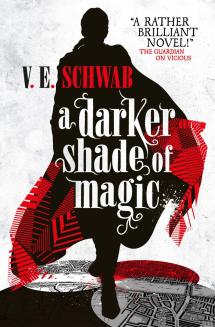 Title: A Darker Shade of Magic

Summary (Back of book):

Kell is one of the last travellers-magicians with a rare ability to travel between parallel universes connected by one magical city. There’s Grey London,without magic and ruled by the mad King George III. Red London-where magic is revered, and whee Kell was raised alongside the heir to the empire. White London-where people fight to control the remaining magic and magic fights back. And once there was Black London… 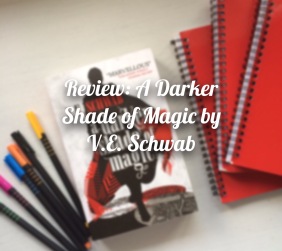 This book was awesome! There are books that are enjoyable but are not really good technically wise, some books that are technically great but are not enjoyable to read and then there’s A Darker Shade of Magic. I was very pleasantly surprised by this book. It wasn’t a suffocating Fantasy, but it was a meh lukewarm one either. This book did what every good fantasy should do- transport you into a different world and in this case three.

A Darker Shade of Magic focuses on Kell who is a Antari, a magician who is able to travel through the three different worlds with the use of blood magic. Though the passage between worlds is restricted, only letters should really be going to and from other worlds, Kell uses his ability to smuggle goods across worlds but this ends abruptly after a smuggling gone wrong threatens the balance of magic across all three worlds. With the help of an eager thief from Grey London, Kell must embark on a journey to save the worlds he has come so accustomed to while keeping his blood pure from the darkness creeping closer.

I think I will just say my one and only biggie complaint quickly. I felt like the plot for this book was very big and maybe the book need to be a bit long to make everything feel a lot more smoothly. It’s not like the plot was jarring, but more time could of been spent on individual scenes to help flesh out everything else out. But besides that point, I thoroughly enjoyed being taken on such a dark, magically adventure. Some aspects did remind me of Harry Potter, you know what I’m talking about if you have read the book, but I think influences were taken in a tasteful manner and given a new twist. At the start there was a lot of explaining, but it didn’t really put me off because it was a fantasy novel and I needed to know some of the magic 101 to understand stuff in the plot. But because the explaining weaved into some interesting action parts which made it more enjoyable to read. But from the middle to the end after the slow start, everything was full throttle! And I loved it! No one likes a drawn out middle and end for no reason. The whole idea of the three Londons and everything is a genius by the way. Some of the magic lore in this book was very thrilling and interesting

Schwab’s writing is so superb throughout the whole book. It was so very silky smooth to read and I enjoyed doing so. Also she had a  way of explaining and simplifying the lore and background of this magical universe was very well done and this made the long paragraphs about the elements and magic in general a lot easier to understand and digest. One thing I should highly praise are the action scenes. Magical fighting scenes can be messy when handled not well, but I didn’t have this problem while reading ADSOM, most of the action scenes being very clear to follow which added the smooth reading experience.

“Bad magic, Kell had called it.
No, thought Lila now. Clever magic.
And clever was more dangerous than bad any day of the week.”

In ADSOM you have a rather wide spectrum of characters which are all enjoyable to read and explore throughout the story. Our main protagonist, Kell, has a lovely youthful spark to his character which is very endearing. His rebellious streak gave him a but more depth as a character though sometimes he could come across a bit flat. He stands better with other characters than as one character by his own is what I’m trying to say and his motivations can come across as being a bit basic. Overall, his character was quite interesting to unravel throughout the course of the novel and his interactions with the other characters were very fun to read.

The other main character is Lila Bard who I grew to like more and more as the book went along. She’s spunky, fierce and a quick thinker. Her character, though rough around the edges, was a delight to read and she added to colour and spice to the whole book. Her ambition to become a pirate may be questionable, but no-one can deny that her and Kell make a great double team.

What I Disliked/Could of Been Improved:

Verdict: This book was jam-packed full of magic, mystery and (surprisngly) darkness. If you want likable characters, an interesting magic system, hate worthy villains and everything else that comes with a high stake fantasy adventure  then pick up this book! It may not be perfect, but it’s better than your average YA fantasy!

25 thoughts on “Review: A Darker Shade of Magic by V.E. Schwab”