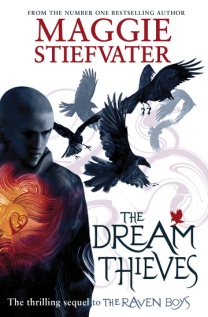 If you could steal things from dreams, what would you take?

One secret: Ronan can bring things out of his dreams.

And sometimes he’s not the only one who wants those things.

Ronan is one of the raven boys—a group of friends, practically brothers, searching for a dead king named Glendower, who they think is hidden somewhere in the hills by their elite private school, Aglionby Academy. The path to Glendower has long lived as an undercurrent beneath town. But now, like Ronan’s secrets, it is beginning to rise to the surface—changing everything in its wake.

*Spoilers possibly for The Raven Boys, but no spoilers for The Dream Thieves

This book was massively addicting! Right from the start the familiarity of Stiefvater’s writing and her characters allowed me to  get swallowed up in the mystical atmosphere Stiefvater created. Everything in the book is just so interesting and intriguing you want to find out more and dig deeper. Just when you think Henrietta can’t get any more fascinating, more elements are brought in as well as new characters and dilemmas which of course was enjoyable to read. The book has this continuous, ominous feeling which builds tension and suspense throughout the novel. The smooth pace of the novel keeps everything feeling well smooth so no jarring moments. The ending was just so WOW and explosive, but just like The Raven Boys, it leads you wanting more, more Cabeswater, more Henreietta and more of the The Raven Boys.

There is really nothing to fault about Stiefvater’s writing. Like Nothing. It flows like a river but full of magic. I really don’t know how Stiefvater does this, but boy do I love it. Stiefvater can write marvelous friendships that you feel invested in so much and she can write mystery ingeniously well and those two elements are the biggest in the whole story which essentially means there’s never a dull moment.

In that moment, Blue was a little in love with all of them.
Their magic. Their quest. Their awfulness and strangeness.
Her raven boys.

Just like Blue, I love the Raven Boys. They all bring something different and quirky which makes there unit so interesting and strong. Without one of the boys the unit feels hollow and weak and I think that what they were combating against throughout the whole novel, trying to stick together.

Again, I admire Blue for her sensibleness, but also her fire and passion. Her relationships with each one of the boys are so real and honest and you can’t help but love Blue because she puts up with all of them. I feel so happy that Blue is a trustworthy and upfront protagonist as well especially when it comes to her inner conflicts and emotions.

Gansey just becomes a deeper and more complex character as the story unfolds. Gansey is a different person at the end of The Dream Thieves compared to the start of The Raven Boys and it’s quite statling. It like he has ties to everyone and though they are edging closer towards Glendower, the ties are serving.

Adam! Gosh sometimes while reading The Dream Thieves I wanted to slap him and hug him at the same time! He is such a conflicted character and has became more detached which I hate, but I can see why he needs to be so.

And finally let’s talk about Ronan because gosh Ronan why do you have to be so fluffy and angry and adorable and intense! I feel in love with his character in this book and you really explore a lot of elements in his personality and what makes Ronan Ronan. I don’t know how Stiefvater created such a complex character in Ronan. His POV might have been my favourite in this book because of how he thinks and feels are so different from a lot of characters I’ve read about. Sometimes loving his character is like loving jagged dagger but maybe that’s why I love him.

And Ronan was everything that was left: molten eyes and a smile made for war.

What I Disliked/Could Be Improved:

Verdict: There was truly nothing to fault. Like nothing. It’s very rare for me to say that- to want nothing more, to have expected anything more. Everything was just beautifully done and so epic! You never really know what direction your heading in when your reading about the Raven Boys. The story is intense, the writing is brilliant and the characters are complex. What more could you want?

10 thoughts on “Review: The Dream Thieves by Maggie Stiefvater”