Hello guys and I hope you are having a terrific Friday. Oooh I haven’t used the word terrific in ages! Anyway, is it only me who is super excited for YALC? They announced some authors who will be coming to the Young Adult Lit convention and boy does the lineup look good. You have authors from V.E Schwab to Darren Shan to Holly Bourne to Derek Landy. Such a wide variety! I’m going to try every way I can to get tickets. 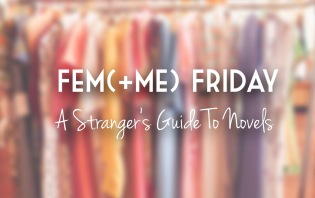 Back to topic, Fem(+ me) Friday is a variation of Femme Friday and is a series of fortnightly posts which just talk and celebrate females in the book business from booktubers to cover designers to fictional characters to authors.

Today we are talking about everybody’s favourite assassin, Celaena Sardothien.

Celaena is one badass girl I have to say. I know people throw out the term ‘strong female protagonist’ which decreases the value of the term, but Celaena is the exact definition of a strong female protagonst. Firstly if you were ever to get in a fight with her there is a big chance that you would end up dead because of her sheer skill. She’s head strong, stubborn, smart, vicious and lethal. But one thing I really do value in Celaena is her loyalty to her friends. When she trusts you, she trusts you and will do anything to protect you, including put her own life at risk.

“Libraries were full of ideas–perhaps the most dangerous and powerful of all weapons.”

“I name you Elentiya.” She kissed the assassin’s brow. “I give you this name to use with honour, to use when other names grow too heavy. I name you Elentiya, ‘Spirit That Could Not Be Broken.”
“I have no name,” she purred. “I’m whoever the keepers of my fate tell me to be.”

Another thing I love about Celaena is that she has a girly side too! I read too many stories about girls just dismissing anything girl, so this was refreshing, seeing a girl-an assassin, love dresses and frills. Though at the start she was damaged and broken, Celaena has developed and became whole again with the help of friends. She is strong, fierce and such a kickass character.
If there’s ever a character to root for, Celaena Sardothien is the protagonist to get behind.

-Femme Friday was created by Vicky @ Books and Strips and means we spotlight a female, real (writers, illustrators, cover designers ect) and not real (characters) to bring some recognition to them.