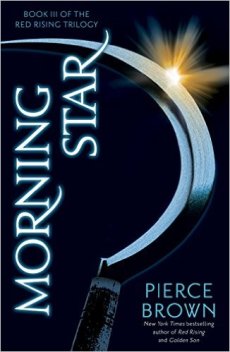 Darrow would have lived in peace, but his enemies brought him war. The Gold overlords demanded his obedience, hanged his wife, and enslaved his people. But Darrow is determined to fight back. Risking everything to transform himself and breach Gold society, Darrow has battled to survive the cutthroat rivalries that breed Society’s mightiest warriors, climbed the ranks, and waited patiently to unleash the revolution that will tear the hierarchy apart from within.

Finally, the time has come.

But devotion to honor and hunger for vengeance run deep on both sides. Darrow and his comrades-in-arms face powerful enemies without scruple or mercy. Among them are some Darrow once considered friends. To win, Darrow will need to inspire those shackled in darkness to break their chains, unmake the world their cruel masters have built, and claim a destiny too long denied – and too glorious to surrender.

At the end of this review there is going to be a spoilery part, just so that I could gush about this book in more detail. This part is non-spoilery, but I recommend you read Red Rising and Golden Sun as my review may spoil somethings for you.

Anyway, this book was just the amazing cherry on the cake. You have the solid foundations from Red Rising, the delicously tense and action icing from Golden Sun. Now the cherry makes that cake even more fantastic! I think I should quit with the cake…

This book was just brilliant! Absolutely brilliant! It’s really hard to describe Morning Star because it’s just the perfect ending to this epic trilogy. From the breathtaking characters to the badass plot twists, everything just came together to make a masterpiece.

I love how this book starts. It starts on the same tone Golden Son ended with- despair. But then you remember that the book still have five hundred pages to go so something is bound to go good for Darrow. I think I love how ‘realistic’ the plot is. The rising isn’t magically winning so Darrow can gain some super human strength from hope. It’s difficult and tiring and throughout the whole book you feel the weight of this rising along with Darrow. The plot thickens with every chapter and sometimes the weight increases or decreases but you are always on a knives-edge with this book, which make it extremely captivating and alluring.

The plot twists in this book are so unexpected and sudden it just adds to the never-ending drama of this book. Sometimes Darrow keeps secrets from us the reader which adds to the excitement of reading the scene. Sometimes the plot twists shock Darrow himself and we are then at his mercy to figure things out.

The writing in this book is so beautiful and ugh I just love reading the passages in this book sometimes. Brown has transported me to another word with his words. Unlike in Red Rising where the world-building was a tiny bit amiss for me, Golden Sun and Morning Star just lock it into place. I don’t want to live in a place which the Society but I want to explore it like how I wanted to explore the magical world in Harry Potter.

During the character deaths (and that’s no spoiler because you should know not everybody is making it out of a war) it felt so raw and it’s in those moments where you realise how emotionally connected Brown has made you be with those characters. Especially Darrow. I don’t know about you, but it felt like I’ve been through the same toil as Darrow throughout the trilogy- when he cried, I cried, when he laughed, I laughed, when he gets betrayed, I get betrayed- and that’s a genius thing to create as a writer.

“And I wonder, in my last moments, if the planet does not mind that we wound her surface or pillage her bounty, because she knows we silly warm things are not even a breath in her cosmic life. We have grown and spread, and will rage and die. And when all that remains of us is our steel monuments and plastic idols, her winds will whisper, her sands will shift, and she will spin on and on, forgetting about the bold, hairless apes who thought they deserved immortality.”

Darrow is one of the greatest characters I have had the chance of reading. I know, big claim but I can hand on heart say it’s true. He has suffered. Truly suffered, but during Morning Star he is still fighting. I don’t think I mentioned this in my Golden Son review but when it gets to the part at the end and he is so close to death (before Ares shows himself) I cried. Not because he was dying- well partly that- but because he did the best he could and I knew, he knew he deserved peace and though it wasn’t what he wanted, he knew that he always tried his best and that was all he could do. He deserved peace. Darrow can be rash, too wrathful, naive but bloddydamn he is smart, a great friend, kind and the best leader a rising could have. I respect Darrow and so should everyone else.

Sevro got some fantastic character development and I loved every moment of his character arc. Though he was his own person before, this just solidified his position of being more than the Reaper’s Shadow. He is a man and a small, disgusting, but loyal to the bone sort of one. I think I grew to like Mustang even more in this book and I loved that we got some great scenes with Victra, Roque and Cassius. I just love the characters in this book! Yes, even Jackal even if he is the coldest bastard none to man. Oh wait I love everyone except for Aja.

Verdict: This book was all attack and no calm. It was like a never-ending heartbeat with each heartbeat stronger than the last. I cannot explain how much I love this series and I can only say you should read it. Now. Buy the Red Rising trilogy now. It’s too good for words if I am honest.

**SPOILER PART! SCROLL ALL THE WAY DOWN IF YOU HAVE NOT READ MORNING STAR. AND PROBABLY CLOSE YOUR EYES SO YOU DON’T CATCH ANY WORDS.***

OMG THIS WAS THE GREATEST TRILOGY! Can we talk about first how I bawled my eyes out because of Ragnar’s death. He was such a sweet, wise soul and he did not deserve to die.

And Roque! Gosh I did not want him to die at all! He was one of my favourite characters throughout the first two books (except for the ending of course) and just like Darrow I wanted him to join the good side. He would of been such a driving force for the rising, but he was manipulated by the wrong side. I cried for his death too.

Who else predicted Sevro and Victra! I was on that ship from Golden Sun and I like the weird relationship they had. I think I would of liked more scenes from them, but this is a war of course.

Now, CAN SOMEONE EXPLAIN THAT HUMONGOUS PLOT TWIST PLEASE! AND THE TWO SEVRO ‘DEATHS’? Seriously, I was so shocked by this I was thinking of closing the book for a while. I think when Sevro ‘died’ at the end, I thought it was real because the rope thing would of been some foretelling his death kind of thing.After Sevro died and Darrow and Mustang were caught I felt the despair I felt at the end of Golden Sun. It didn’t’ matter that there were like 70 pages left. It was over. Cassius betrayed them and it was over…UNTIL IT WASN’T AND IT WAS THE PLAN ALL ALONG!

Gosh, I both hate and love Pierce Brown when he does that kind of twist.

Who else is loving Pax as well? That was such a cute note to end it on.

Let me know your thought’s of Morning Star down below! I need to talk to someone about this book!